An optimal solution for telemarketing companies and departments 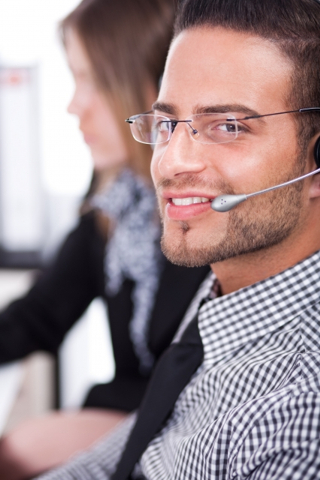 OriGn's flexibility and its ability to carry out and control an unlimited number of simultaneous campaigns make it the ideal tool to completely manage any company or department dedicated to telemarketing.

You will be able to design, implement and monitor all your campaigns entirely from a single application.

The key to the great productivity boost that companies using OriGn (pronounced "origin") benefit from lies largely in that it assists agents perfectly.

They learn to use our software solution for telemarketing and call centers in minutes as they carry out all their taks from a single place: the Agent Desktop. The following video shows his overall performance when it is being used to make calls in progressive dialing mode, even though it can also work in predictive, multi-progressive and preview dialing modes, as well as for answering calls.

As you can see in the example image shown over these lines, the Visual Form Designer allows you, as the name suggests, to create visually data-entry forms.

It is also possible to integrate images, use different fonts, colors ...

The most powerful scripting language

OriGn-script, the scripting language of OriGn—the CTI and CRM software for call centers, telemarketing, sales by phone...—is based on Object Pascal and is so powerful that it even allows the use of OOP (Object Oriented Programming).

Along with the Visual Form Designer and thanks to the integration of specialized commands that allow an easy and direct interaction with OriGn's CTI core, as well as with the Database, OriGn-script composes a quick designing environment for the development of dramatically effective and endlessly flexible data entry forms.

But its use is optional. If you prefer to design your forms without writing a single line of code, just use the Aided Entry-Flow Designer.

OriGn's Visual Form Designer will allow you not only to create in an entirely visual manner any data entry form, however complex, but also to accurately determine the data entry flow, by using either the Aided Entry-Flow Designer or OriGn-Script, as you prefer.

Thus, agents will only have to worry about keeping a fluent conversation with the contacts, since it will be our program's job to show at all times the next data field to fill, as well as to go back to the previous ones in the right order if need be.

As a result, you will never find empty data that should have been entered, nor, what sometimes is even worse, several mutually exclusive sections filled at the same time by mistake.

As you can see in the screenshot above these lines, the Aided Entry-Flow Designer allows you to determine the data-entry flow of sophisticated forms without having to write a single line of code.

If you or your staff have some programming knowledge, nothing will be more useful to you than to release the full power of OriGn through the use of our unique scripting language, OriGn-script, which, being based on a general-purpose programming language (Object Pascal), is only limited by your imagination.

Additionally, OriGn-script's specialized commands allow users with just some basic programming knowledge or even with none to quickly learn to create extremely sophisticated data-entry flows and, by doing so, optimize to the fullest extent the work of the agents.

This is further facilitated by the fact that OriGn-script's commands can be written both in English and Spanish.

The following image shows a fragment of a script, as an example. 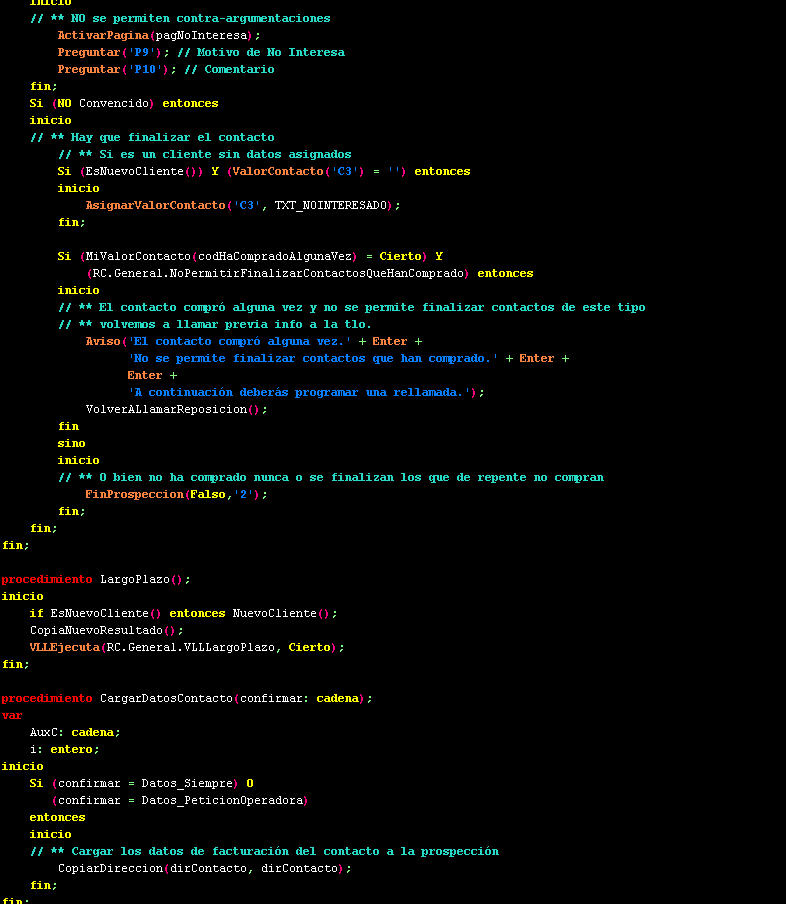 But remember: if you prefer not to "program", you just have to use the Aided Entry-Flow Designer.

You can embed, if desired, the sales pitch of the campaign in the data entry form itself, so that agents have a single source of information: OriGn.

If you believe, for any reason, that predictive dialing does not meet your needs, OriGn can work in progressive dialing mode; and even in data-preview dialing mode, in case that you want your agents to devote extreme attention to each of the calls to make.

Watch the first video of this page to see how the progressive dialing works in the Agent Desktop.

Since in most call centers dedicated to telemarketing it is key to make as many calls as possible, OriGn includes our exclusive Predictive Dialer Server. In the following video you can see how it works.

The operation of the predictive dialing from the point of of view of the agent (in the Agent Desktop) is shown next.

The fact that OriGn is one fully integrated application allows operations as amazing as the same group of agents working at once in several outbound campaigns in predictive dialing mode and in several inbound campaigns (call blending).

Even when working in predictive-dialing mode, OriGn ensures that the follow-up calls are made on time, either by the same agent or by another one, depending on the configuration you decide in relation to the situation of the contact.

OriGn also handles the call retries you deem necessary, respecting the time slots that you can set and up to a maximum number of retries that you can configure for all the telephone numbers or just for those that have never been reached.

Evidently, OriGn allows you to import contacts and their data from external sources. What is surprising is that you can do so while the campaign is being carried out by the agents.

The amount of time and headaches that such a simple detail will save you does not need to be pointed out. Or does it?